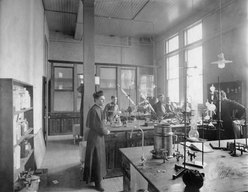 This collection brings together all of the patents assigned to the University of Notre Dame from 1952 to the present, plus other selected patents prior to 1952. Each record includes a full-text searchable and accessible PDF document for the corresponding invention. The record also includes the present-day academic department with which the inventor was or would have been associated.

Why patents? According to the University’s IDEA Center, “Part of the University’s public service mission is to ensure that the results of its research are made available for public use and benefit. This is accomplished in many ways: through educating students, publishing results of research, and ensuring that inventions are developed into useful products and services for the benefit of the public.”

“Today, our research universities play an even more vital role in creating a better future—not only by educating close to 600,000 graduate students in science and engineering every year, but also, and critically, by performing more than 15% of U.S. R&D in 2011—and according to 2012 NSF data, accounted for the majority (53%) of national basic research. This research, some basic, some applied or ‘translational’ creates new technologies, new products and services, medicines, diagnostics — the list is long and impressive — but also, this research gives rise to entire new industries.” (David Winwood, “The Importance of Patents and Academic Technology Transfer,” March 26, 2015)

The collection also includes the most famous patent associated with Notre Dame, U.S. patent 1,811,959 from 1931, “Vinyl derivatives of acetylene and method of preparing the same” — in other words, synthetic rubber. Invented by Rev. Fr. Julius Nieuwland, CSC, and assigned to DuPont, this patent did, in fact, give rise to entire new industries. More about this invention may be found at the National Inventors Hall of Fame.

These patents are one more example of the University fulfilling Rev. Fr. Sorin’s vision of becoming a “powerful force for good.”