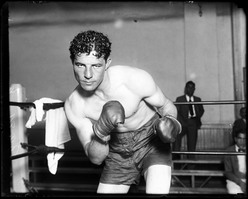 The Harry E. Winkler photographic collection includes more than 7,500 different boxing related images in various formats. Winkler was a longtime Los Angeles area fight figure and California correspondent for The Ring magazine from 1939 to 1953. He is best remembered, however, for his extensive collection of boxing photographs, many of which were acquired by the Hesburgh Libraries in 1977. Among the images are close to 4,000 4 x 5 inch glass negatives taken in greater Los Angeles in the 1920s and 30s. These are typically posed promotional portraits, of individuals or groups; virtually no fight scenes are included. Among the boxers best represented (by more than thirty plates) are: Sgt. Sammy Baker, Newsboy Brown, Tony Canzoneri, Bert Colima, Speedy Dado, Jack Dempsey, Joe Dundee, Jackie Fields, Ace Hudkins, Les Kennedy, Fidel LaBarba, Jimmy McLarnin, Tod Morgan, Tommy O’Brien, Lee Ramage, Baby Sal Sorio, Bud Taylor, and Mickey Walker.

Winkler negatives were typically identified only by the subject’s name; locations and dates seldom appear, either on the boxes that originally housed the plates or on the plates themselves. The estimated dates here supplied are based on the evidence of the image itself and on the known presence of a given fighter in Southern California. Most of the photographs were taken in training facilities and other boxing venues. Two locations in particular bear mentioning, since they recur with such frequency. The first is the old Main Street Gym at 321 South Main in Los Angeles, opened by Carlo Curtis in the mid-20s. The second is Dempsey’s Manhattan Gym, opened by the champ’s brother Barney at 534 ½ Spring Street in 1925. The mise èn scenes of the portraits are often as appealing as the intended subjects; in many instances, these backgrounds would have been cropped or eliminated entirely when the negatives were printed or published in periodicals. The photographers responsible for the Winkler negatives cannot be identified with assurance. A stamp on the backs of some first-generation prints made from the negatives credits Carroll Photo Service on East Pico in Los Angeles; David Carroll did many kinds of photo work in LA in the 20s, 30s, and 40s. Newspaper photographers more narrowly associated with the boxing scene at the time include Bob Miller and Fred Tschantre.