Beaucaire Castle: Overall distant view across the Rhone, with large polygonal tower to the right 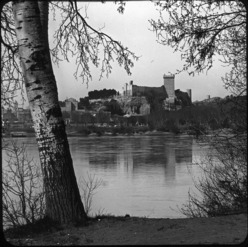 The remains of a castle in the commune of Beaucaire. The existing structures date primarily from the 12th and 16th centuries. First built in the 11th century; it was a possession of the Counts of Toulouse from 1125. It was torn down in 1632 on Cardinal Richelieu’s orders. It used to be protected by a wall, the trace of which can still be followed. It includes a strange polygonal tower perched on a rocky spur, the façades dominating the sheer drop, and a fine round corner tower. Once inside the walls, a staircase leads to a small Romanesque chapel with a sculpted tympanum and frieze, and then to the Musée Auguste Jacquet. The museum has exhibits on the region’s archaeology (dating back more than 40,000 years) and popular arts and traditions. The castle is owned by the commune and is open to the public. It has been listed since 1875 as a monument historique by the French Ministry of Culture.