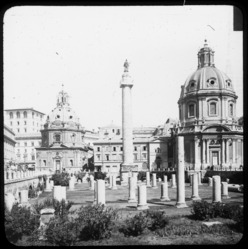 The column is now topped with a statue of St. Peter.

Trajan’s Column is a Roman triumphal column, which commemorates Roman emperor Trajan’s victory in the Dacian Wars. What was new about this column were the shaft’s spiral narrative relief and internal stair of 185 steps. In 1588 Sixtus V installed on the egg-and-dart echinus a new platform and statue of St Peter on the top. The fascination of artists (such as Piranesi) and rulers alike culminated in the project of Napoleon III (reigned 1852-1870) to cast the column reliefs. These 114 panels (Paris, Louvre; London, V&A; ex-Lateran Pal., Rome; Rome, Mus. Civiltà) document details now eroded by pollution, although restoration in the 1980s has allowed detailed re-examination. Modern ‘scene’ numbers (1–155) follow Cichorius, 1896–1900.