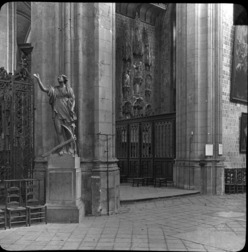 Most of the sculpture comes from a loft in Renaissance style built between 1545 and 1549, and erected at the entrance to the choir. The structure of the rood screen was black marble and was decorated with bas-reliefs and statues in the round carved in alabaster by Du Broeucq. After the destruction of the rood screen in 1797 in the French Revolution, the vast majority of works of Du Broeucq were recovered and placed at different locations in the Collegiate Church.

Work stopped in 1621, without the church ever being completed. At the keystone, it reaches 24.5 meters in height. The choir is surrounded by an ambulatory and 15 chapels. The construction of a tower 190 meters high was originally intended; it was begun in 1548, but the work ceased in 1691 at roof height. The church is known for is 16th century stained glass and interior sculpture by Jacques Du Broeucq. It also houses a Gothic Revival (1887) reliquary of St. Waudru, and a Louis XVI style processional carriage (1779-1782), used to carry the reliquary in an annual procession.