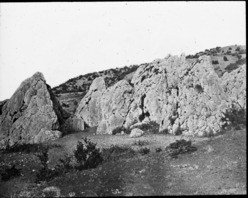 Previously in the 19th century, at Midas Sehri, (also known as Midas City, near the modern village of Yazilikaya) a “Tomb of Midas” was discovered. The name was given on the basis of the word “Mida”, identified in incompletely translated Phrygian inscriptions. That “tomb” is no longer believed to be a tomb, but rather a sacred site to Cybele. The relief is 17 meters high and dates from the 6th century BCE (two centuries after Midas). Cybele (Phrygian: Matar Kubileya/Kubeleya “Kubeleyan Mother”), was the Phrygian deification of the Earth Mother. As with Greek Gaia (the “Earth”), or her Minoan equivalent Rhea, Cybele embodies the fertile Earth. The cult reached the Phrygians in inner Anatolia, where it took on special significance.