Flow Phenomena under a Backpressure in an Axisymmetric Scramjet Model 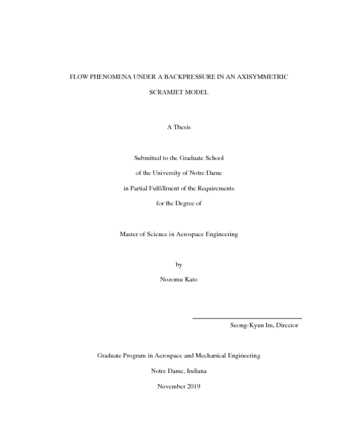 The supersonic combustion ramjet (scramjet) engine has been developed as a promising propulsion system for hypersonic vehicles. The primary objective of the current study is to investigate the flow features under various backpressure conditions in axisymmetric scramjets. Particularly, the current study focuses on the flow behaviors under inlet unstart, a critical phenomenon resulting in a loss of thrust. Three angled-wedge inlets (α = 0-, 6-, and 9-degree) were used to investigate the effect of the incident shock wave on unstart. Flow visualizations and wall pressure measurements provided qualitative and quantitative results.

The fuel injection was used to increase the backpressure in low-enthalpy conditions to trigger unstart. The flow features were investigated by using a flow visualization technique of the planar laser Rayleigh scattering (PLRS). For the flow without jet injection, the PLRS visualized flow features such as the axisymmetric flow structure, transition and the growth of the boundary layer, the conical incident shock wave, the shock wave-boundary layer interaction (SBLI), and the shock-shock interaction (SSI). The wall pressure measurement showed that there were pressure gradients in the isolator imposed by the incident shock wave for α = 6 and 9, whereas minor pressure gradients were present for α = 0. For the choked flow, the PLRS images depicted the pseudoshock propagating upstream within the isolator. The pseudoshock advanced upstream as the J increased and anchored at a certain location. The pseudoshock location fluctuated to a certain extent for all the inlets, but the pseudoshock for α = 0 fluctuated more than α = 6 and 9. The wall pressure measurement suggested the presence of the termination shock wave and the subsonic acceleration in the combustor.
The schlieren imaging system was used to determine the unstart thresholds. The unstart threshold in terms of the jet momentum ratio was highest for α = 6 and lowest for α = 0. The lower unstart threshold of α = 9 compared to α = 6 was attributed to the higher downstream pressure of the baseflow for α = 9; less pressure rise was needed to choke the flow for α = 9. The smaller capture area of α = 0 may be the cause of the lowest unstart threshold of α = 0; the lower total momentum of the captured flow for α = 0 was not able to hold the propagating unstart shock. The PLRS visualized the unstart shock that propagates upstream. In addition, the quasi-steady and transient motions of the unstart shock were observed due to the adverse pressure gradient imposed by the incident shock wave. The unstart shock velocity was estimated from the wall pressure data, and the shock velocities for α = 6 and 9 suggested the transient and the quasi-steady motions of the unstart shock.

The effect of combustion heat release on unstart was investigated under high-enthalpy conditions. Direct flame imaging and CH* chemiluminescence imaging were conducted to investigate the combustion dynamics. The averaged images of the direct flame visualization showed the ethylene flame, the bow shock, and the pseudoshock-induced luminescence in the isolator. As the jet momentum increased, the pseudoshock front advanced, the flame tail shortened, and the flame propagated upstream. The wall pressure measurement revealed that the unstart thresholds were lower than the cold flow experiments since the heat release from the combustion further increased the downstream pressure. The fluctuating flame was observed from CH* chemiluminescence images. It was believed that the coupling between the fluid mechanics and combustion dynamics would account for the fluctuation of the flame.