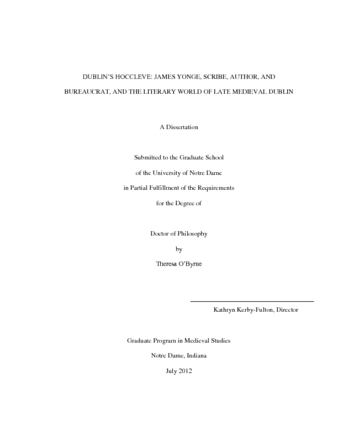 James Yonge, known for his Hiberno-English translation of the Secreta secretorum, was a legal scribe and notary in early fifteenth-century Dublin. This thesis explores Yonge’s literary works, identifies his handwriting, and uses over eighty documents newly associated with the scribe to reconstruct his career and socio-professional circle.

In 1422, Yonge completed an English translation of Jofroi of Waterford’s Secreta secretorum under the patronage of James Butler, 4th Earl of Ormond. The author vacillates between slavish translation and radical alteration of his exemplar, re-shaping the text to appeal to Butler, King Henry V and his court, and an Anglo-Irish audience that included the nobility, government officials, and members of the mercantile class.

One outcome of English intervention in Ireland was the dissemination of tales regarding Saint Patrick’s Purgatory, where pilgrims enclosed in a small cave experienced visions of purgatory. Treatises detailing these visions circulated in England and on the Continent. Yonge was the author of the first such narrative written in Ireland. Yonge’s 1412 Latin account of the visit to the Purgatory of Laurence Rathold, a retainer of Sigismund I of Hungary, incorporates traditional elements of earlier works such as H. of Saltrey’s Tractatus de Purgatorio Sancti Patricii and the anonymous Visiones Georgii, yet offers new literary innovations. Yonge uses the narrative to market Ireland as a pilgrimage destination and frames his work as part literary text and part notarial instrument, pitching it to a pan-European audience.

The patterns of employment and social relationships of Yonge and his circle echo those of Yonge’s contemporaries in London, especially Geoffrey Chaucer, John Carpenter, and Thomas Hoccleve. The training and careers of Yonge’s two students reveal much about scribal training in Anglo-Ireland while providing a model for scribal education applicable to other English cities. This thesis augments the canon of late medieval Anglo-Irish authors and texts by demonstrating that several texts once considered English were written in the Dublin area by Yonge’s student Nicholas Bellewe.

This exploration of Yonge and his circle is supported with editions of literary and legal documents that will further research into medieval Anglo-Ireland.