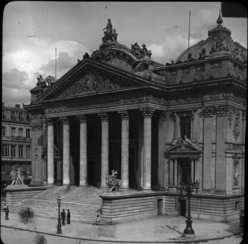 The Brussels Stock Exchange (BSE) was founded in Brussels, Belgium by Napoleonic decree in 1801. The building that houses the Brussels Stock Exchange does not have a distinct name, though it is usually called simply the Bourse. It is located on Boulevard Anspach, and is the namesake of the Beursplein/Place de la Bourse, which is, after the Grand Place, the second most important square in Brussels. It mixes elements of the Neo-Renaissance and Second Empire architectural styles. It has an abundance of ornaments and sculptures, created by famous artists, including the brothers Joseph and Jacques Jacquet, Guillaume de Groot, French sculptor Albert-Ernest Carrier-Belleuse and his then-assistant Auguste Rodin.