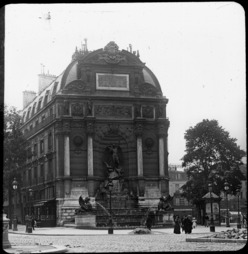 In 1855 Haussmann completed an enormous new boulevard, originally called boulevard de Sébastopol-rive-gauche, now called Boulevard Saint-Michel, which opened up the small place Pont-Saint-Michel into a much larger space. Davioud was charged with the new facades and fountain of the square. The prefect authorities asked to build a fountain to hide the end wall of the building at the corner of boulevard Saint-Michel and Saint-André des Arts. The iconography is the Archangel Michael wrestling the devil. Nine sculptors worked on the fountain, including Barre, Duret and Jacquemart.