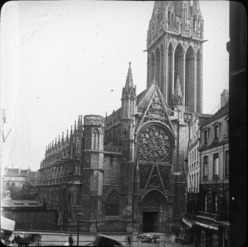 St-Pierre was built on the south side of Caen Chateau in the 13th and 14th centuries, and an ornate Renaissance east end was added in the early 16th century. It is a fine example of the transition between Gothic and Renaissance forms. The church is best known for its 75m (245 ft) tower of 1308, whose soaring spire was destroyed in 1944 and subsequently restored. The interior features an elegant Gothic nave and an elaborate Renaissance apse, with rich decoration and unusual vaulting.