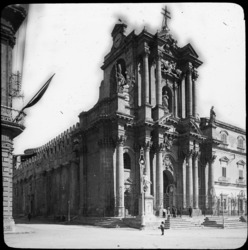 The Cathedral was built by (Byzantine) bishop Zosimo in the 7th century over the great Temple of Athena (5th century BCE), on the Ortygia island. This was a Doric edifice with six columns on the short sides and 14 on the long sides; these can still be seen incorporated in the walls of the current church. The base of the Greek edifice had three steps. During the two centuries of Muslim rule (878-1038), the cathedral was converted into a mosque. The interior of the church has a nave and two aisles. The roof of the nave is from Norman times (the Hauteville dynasty ruled Sicily from 1072 to 1194), as well as the mosaics in the apses. The cathedral, which had been damaged in the 1693 earthquake, was rebuilt (1728-1754) to a design by Andrea Palma, the architect of the Palermo Senate, with a double order of Corinthian columns, and statues by Ignazio Marabitti.