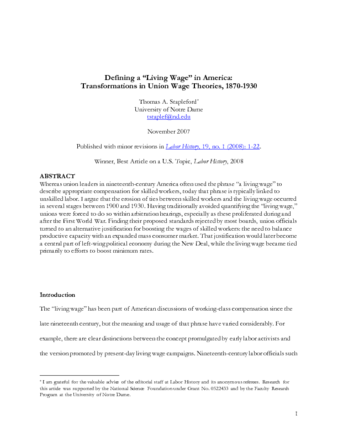 Whereas union leaders in nineteenth-century America often used the phrase “a living wage” to describe appropriate compensation for skilled workers, today that phrase is typically linked to unskilled labor. I argue that the erosion of ties between skilled workers and the living wage occurred in several stages between 1900 and 1930. Having traditionally avoided quantifying the “living wage,” unions were forced to do so within arbitration hearings, especially as these proliferated during and after the First World War. Finding their proposed standards rejected by most boards, union officials turned to an alternative justification for boosting the wages of skilled workers: the need to balance productive capacity with an expanded mass consumer market. That justification would later become a central part of left-wing political economy during the New Deal, while the living wage became tied primarily to efforts to boost minimum rates.