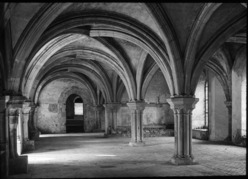 Vaulted in three aisles of three bays; the easternmost bay has been demolished. Here, rib vaults were used for the first time at the site, rising from clustered piers with octagonal capitals