Basilica Cathedral of Arequipa: Detail of the two towers of the facade 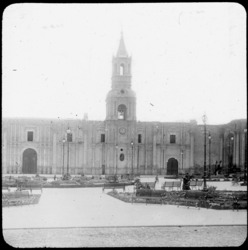 Construction of the cathedral (founded 1612) began in 1621 following plans by Andrés de Espinoza and continued for several decades under the architect Moscoso; it was completed under Juan de Aldana in 1656. Following a fire in 1844 and the 1868 earthquake it was rebuilt by Lucas Poblete, and it retains much of the original plan. It is a long, low building, with a façade occupying the entire north end of the city’s main square, the Plaza de Armas. It is divided into three largely undecorated registers, each incorporating a series of 70 columns. Surrounding the Plaza de Armas are two-storey Neo-classical arcades built in sillar (a white, porous volcanic stone), which complement the cathedral and give the square a sense of architectural unity. The second storey (post-1900) was added in the Republican period.