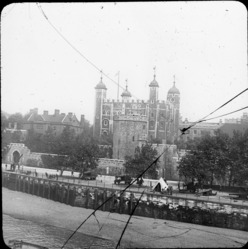 The castle was founded by William I immediately after the Norman Conquest (1066). It was strategically sited in the south-east angle of the Roman city wall, just downstream from Old London Bridge, commanding open countryside to the east, the Thames and the bridge to the south, and the city to the north and west. By the end of the 13th century the outer wall enclosed an area of about 7 ha, which is roughly the present size of the castle. The huge stone donjon, later known as the White Tower, which was henceforth to dominate the castle, was begun shortly after 1077 by William I and completed ca. 1100 by William II (reigned 1087-1100). The full development of the Tower of London was achieved during the reign of Edward I. Throughout the Middle Ages the Tower of London was used as a fortress, palace, arsenal, mint, royal menagerie and prison. In the later 19th century most of the ordnance buildings were removed, and the Tower was restored, first by Anthony Salvin (1853-1868) and subsequently by architects of the Office of Works, giving it the medieval appearance it bears today.