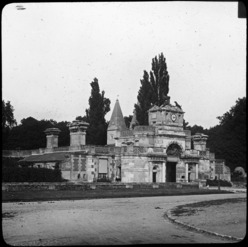 French 16th-century château approximately 75 km west of Paris, in the département of Eure-et-Loire. In 1546 Diane de Poitiers began to build a modest house in the village of Anet; it underwent considerable and magnificent enlargement (after 1547, until 1553) when her lover Henry II became King of France and placed Philibert de L'Orme and virtually unlimited resources at her disposal. The château is built on a moated site around three courtyards with gardens to the north. Largely demolished (1798-1811) after the French Revolution, all that remains of this complex are the entrance gate and screen wall, a section of the west wing, the frontispiece of the north wing (now Paris, École des Beaux-Arts) and parts of the cryptoporticus, the chapel in the east wing and the Basse Cour gateway. This entrance gateway is a Doric triumphal arch of very unclassical type. In the tympanum above the lintel, which bears a Latin inscription alluding to Henry II and Diane de Poitiers, was a bronze relief (Paris, Louvre) by Benvenuto Cellini depicting the Nymph of Fontainebleau, now replaced by a plaster copy. On top of the gateway stands a bronze group; a deer surrounded by four hunting dogs, formerly set in motion by a clockwork mechanism, alluding to Diana the huntress.