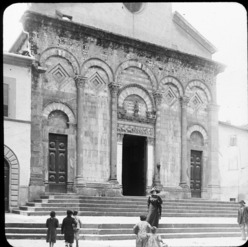 The façade shows the typical bichrome marble decoration of the Pistoiese Romanesque style, executed in the mid-12th century by Gruamonte and his brother Adeodatus, who was also responsible for the sculptures and for the portal’s architrave depicting the “Voyage of the Magi”.

Giovanni Pisano’s first pulpit, in S Andrea, Pistoia, was begun ca. 1298, partly executed in Pisa and finished in 1301, the date of the inscription, which describes the sculptor as the ‘son of Nicola, and blessed with higher skill’. The church probably dates as early as the 8th century; it was extended in the mid 12th century. The portal depicts the “Voyage of the Magi”, a rare theme whose use here derives from the fact that the church was located on the Via Francigena, by which pilgrims reached Rome from France.