Archaeological Site of Troy: Portion of the legendary walls of Troy (Level VII) 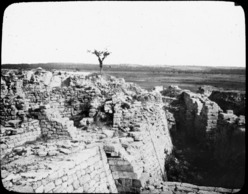 Hisarlik (Turkish: Hisarlık, “Place of Fortresses”), is the modern name for the site of ancient Troy, also known as Ilion, and is located in what is now Turkey (historically Anatolia). The unoccupied archaeological site lies approximately 6.5 km from the Aegean Sea and equidistant from the Dardanelles. A tell is an artificial hill, built up over centuries and millennia of occupation from its original site on a bedrock knob. The settlement began as an Early Bronze Age citadel in the 3rd millenium BCE. The site was later occupied by Greeks and Romans. The strata have been labeled Troy I-IX. The Hisarlik tell, a thirty-meter-high mound, was identified as a possible site of ancient Troy by a number of amateur archaeologists in the early to mid 19th century. The most dedicated of these was Frank Calvert, whose early work was overshadowed by the now famous German amateur archaeologist Heinrich Schliemann in the 1870s. The historical identification of the site with Troy and the historicity of the Trojan War remain unproven. It is a UNESCO World Heritage Site.