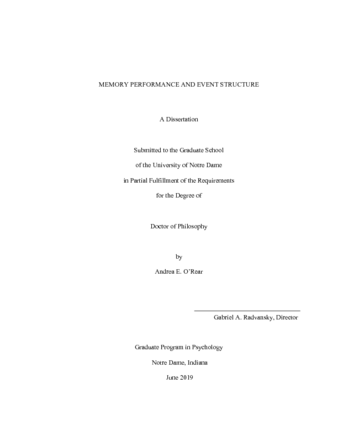 Dividing information into more than one event has been shown to enhance or impair memory performance in different studies. Recent findings suggested that the number of events at both encoding and testing work together to influence prospective memory performance (remembering to do something in the future) when the cue is a location (O'Rear & Radvansky, 2019). Specifically, two encoding events and one cue event led to the highest performance.

Theories of event cognition, cue overload, and priming make competing predictions about how different patterns of event structure will influence memory performance. With the goal of clarifying the boundaries of these three theories, the present study tested the effect of event structure on other types of prospective and retrospective memory tasks. Of secondary interest, event and non-event information were tested to determine if the nature of materials has an effect beyond that of external structure.

In Experiment 1, participants traveled through a virtual shopping mall and performed pairs of prospective memory tasks cued by locations, people, or times. Instructions for the two tasks came from one or two sources, and the tasks were done in response to one or two cues. Experiment 2 embedded the four event structures in narratives, in which one or two characters discuss one or two event or non-event topics. Retrospective memory was measured with a recognition test. Finally, Experiment 3 evaluated event structure using sentence pairs describing events and non-events that either can or cannot co-occur. Sentences were presented in one or two computer windows, and memory was assessed with a recognition test.

Event cognition theory was nominally supported by location-based prospective memory, and verbatim memory for narrative non-event information significantly supported this as well. Cue overload was partially found in propositional and event model memory for narrative event information. Finally, partial support for priming was found in person- and time-based prospective memory, and the event sentence pairs. These results further identify how event structure can improve or impair memory performance in multiple conditions by clarifying the boundaries of event cognition, cue overload, and priming theories of memory.