Three-Dimensional Gigapan Views of Archaeological Sites and Artifacts: Examples from the Paleolithic of Southwest France 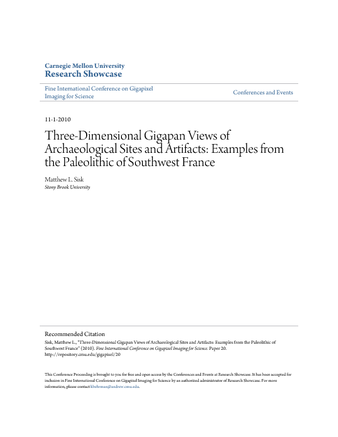 The use of Gigapan imagery in an archaeological context allows for quick, very high resolution recording of excavation surfaces, artifacts and surrounding areas. At the Paleolithic site of Abri Castanet (France), we have, since 2008, used a Gigapan imager mounted horizontally to record lateral variation across our active excavation surface. Using GIS software and topographic data from our onsite Total Station, we can then minimize distortion, plot the image relative to artifact and feature locations and display all of these data in three-dimensions. This gives us a unique way to record and analyze patterns of variation across a constrained archaeological horizon. In addition, we have recently began a project using this technique to record, process and project imagery of early Upper Paleolithic engraved blocks and rockshelter ceilings, representing some of the earliest examples of cave art in Europe.