Law Courts of Brussels: Central detail of facade and dome 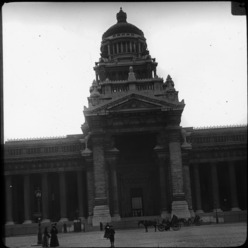 The total cost of the construction, land and furnishings was somewhere in the region of 45-50 million Belgian francs. It is the biggest building constructed in the 19th century, and is larger than St. Peter’s Basilica in Rome. It has a total built ground surface of 26,000 m². Situated on a hill, there is a level difference of 20 meters between the upper and lower square, which results in multiple entrances to the building at different levels. Sometimes categorized as Baroque Revival, the Palais de Justice is really an eclectic composition, with Néo-Grec, Neo-classical and Renaissance Revival elements disposed with great originality.