Topographic views of Frankfurt am Main: East side of the Römerberg 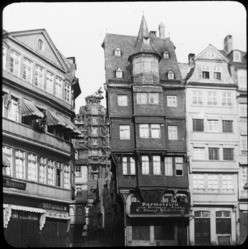 Part of reconstruction (1981-1984) of six houses at the east side of the Römerberg which were destroyed in World War II.

Views of Frankfurt am Main distributed by the French company G. Massiot & Cie (actual photographer unknown). Distributed before 1912. Large sections of the Altstadt were rebuilt after World War II bombing and so only a few old buildings are actually preserved today. The surrounding buildings (houses and shops) of the Römerberg (square around the city hall) are largely reconstructions today. These views show the area before WWII.