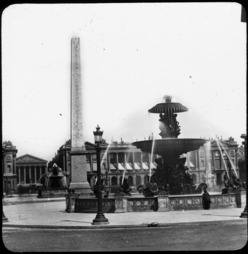 In the distance the Fountain of the Rivers, to the north, can be seen in front of the facade of the Madeleine church, with the obelisk in center. South Maritime Fountain is closest.

The Fontaines de la Concorde are two monumental fountains located in the Place de la Concorde in the center of Paris. They were designed by Jacques Ignace Hittorff, and completed in 1840 during the reign of King Louis-Philippe. The south fountain commemorates the maritime commerce and industry of France, and the north fountain commemorates navigation and commerce on the rivers of France. The fountains sit on either side of the obelisk from Luxor given to Louis-Philippe by the viceroy of Egypt in 1831. Twelve sculptors worked on the fountains.