Roman ruins at Timgad: View of the Forum 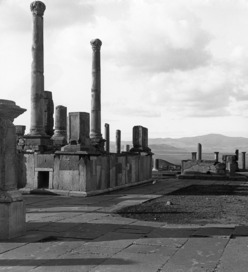 The forum was placed more or less centrally, where the main north-south street met the main east-west street. The square (50 x 43 m) was surrounded by shops, a public lavatory, the judicial basilica, a temple dedicated to Trajan and his military victories and, in the north-east corner, the so-called Maison des Jardinières.