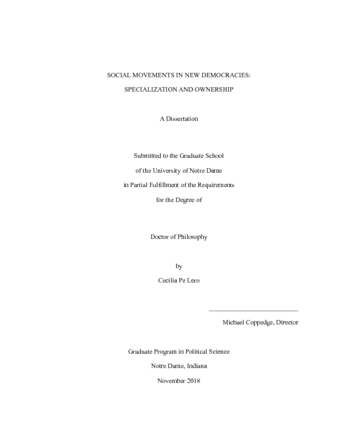 The restoration of democratic regimes in the Philippines and Brazil in the 1980s provided an opportunity to redefine the relationship between the state and social movements. As movements carried their advocacies into the new democratic regimes, activism became about how movements could shape nascent democratic institutions to expand and regularize movement access, while simultaneously preparing the movement itself to take part in institutional decision-making. These new opportunities and institutions thus necessitated new repertoires of contention. This dissertation seeks to add to our understanding about these processes by answering two questions: How have social movements navigated the new democratic space? and, What determines the kinds of repertoires social movement actors adopted?

Through the in-depth process tracing of four social movement campaigns, which included my personal attendance at meetings, fora, and strategy sessions, as well as over eighty interviews, I make two arguments to explain how social movement actors in the Philippines and Brazil chose their repertoires. First, social movement organizations working on a given issue carve out specialized niches for themselves in terms of skills, target sector, areas of influence, and political ideology. Thus, when social movement organizations work together on a particular issue or campaign, a division of labor develops that can allow the movement to approach the issue on a variety of strategic fronts.

Second, social movement organizations in democratic Philippines and Brazil emphasized framing their strategies and tactics in terms of sectoral ownership and decision via collective processes. Sectoral ownership, or framing a campaign or advocacy as being the demand of the affected sector itself, is important for social movement organizations to compete with both the state as well as other organizations as the “legitimate” representative of the people. Relatedly, collective decision-making processes are emphasized in order to provide a quasi-formal veneer to this claim of legitimate representation, as well as to act as a parallel to the democratic processes that movements urge the state to follow. Thus, the hope is that internal processes both put pressure on the state to adopt democratic policy-making processes, while simultaneously preparing social movement members to eventually participate in such state processes.