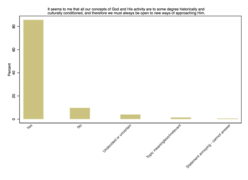 Sr Neal was a member of the Sisters of Notre Dame de Namur. She started her teaching career at Emmanuel College in 1953 later receiving a doctorate in sociology from Harvard University in 1963. In 1965 she became Director of the Research Committee for the Conference of Major Superiors of Women (later renamed The Leadership Conference of Women Religious). In this position she began a study of the lives and attitudes of women religious in light of the implementation of changes brought on by the decrees of the Vatican II Council.

In 1967 she directed a survey of all members of congregations of women religious. She prepared a survey of 649 questions which went out to nearly 400 congregations numbering over 130,000 individual sisters, and some demographic information. The dataset presented here consists of the responses to this survey. She did follow-up surveys from 1968 to 1990, but none of these later studies involved near this number of respondents and they are not part of this dataset. The surveys and looked at the values and beliefs of women religious in a formative period for all religious congregations in the wake of Vatican II. Most of the survey questions elicited answers in the form of Likert scales (e.g. agree, neutral, disagree). Sister Neal published extensively on the results of her work. The Sister Survey, as her collective research became known, is not without controversy but the results are still of great interest today.

The information compiled by Sr. Neal during her decades of research came to the University of Notre Dame Archives in 1995 and 1996 as part of the Sr. Neal papers. The original magnetic tapes (21 tapes) that recorded the findings of Sr. Neal’s work were copied to contemporary format tapes (a total of two tapes) in late 1995, then to two cartridges and finally to a CD. The University of Notre Dame Archives fully documented all of the transfers, along with the technical information that allow the current dataset to be extracted from all of the information contained on original tapes donated to the University Archives.

The finding aid of Sr Neal papers can be found at http://archives.nd.edu/findaids/ead/xml/nea.xml.

This resource consists of six parts:

Please Note: You may encounter a delay before a download begins. Large or infrequently accessed files can take several minutes to retrieve from our archival storage system.
1 - 6 of 6