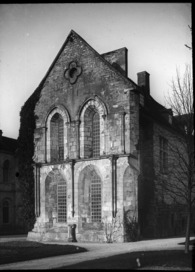 The buildings are Romanesque except for the later abbot’s lodgings and infirmary. The original refectory was demolished in 1745.