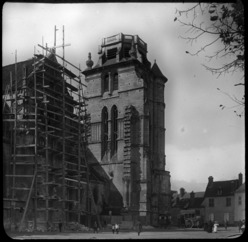 Louis Graves, Beauvaisien archaeologist, proposed to the Committee on Historical Monuments to close the church because of structural decay. It is classified an historic monument April 25, 1846. In 1892 money is finally released for repairs.

The church of Saint-Étienne is a Romanesque-Gothic building (rebuilt after 1180-1220). It has a Romanesque nave of the twelfth and thirteenth centuries and a Gothic choir of the sixteenth century. The north transept has exterior sculpture around one of the rose windows that is a “wheel of life” or “fortune’s wheel”. The church is noted for its stained glass by Engrand Le Prince and Nicolas Le Prince, whose masterpieces include the Tree of Jesse window (1524).