Athens Acropolis: Erechtheion: View of cast of one caryatid in museum 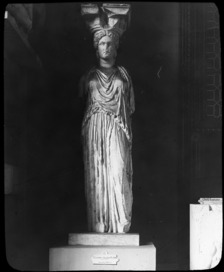 The five original caryatids have been transferred (2007) from the old Acropolis Museum (where they were first moved in 1979) to the New Acropolis Museum. The sixth is in the British Museum, having been taken by Lord Elgin.