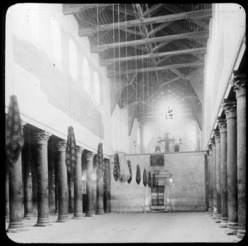 View shows hanging lamps and chandeliers covered and a partial wall standing before the iconostasis; this has been removed.

One of the oldest continuously operating churches in the world. The structure is built over the cave that tradition marks as the birthplace of Jesus of Nazareth. The first basilica on this site (destroyed 529) was begun by Saint Helena, the mother of the Emperor Constantine I. The current basilica was rebuilt in its present form in 565 by the Emperor Justinian I. Muslim veneration for Jesus’s birthplace probably explains why the church escaped destruction during the reign of Caliph al-Ḥākim in 1009. It is the only pre-Muslim church in Palestine to have survived intact and in continuous use to the present day. The basilica and surrounding buildings were expanded during the 12th century, under joint patronage of the Byzantine Emperor Manuel I Comnenus and King Amalric, ruler of the Latin Kingdom.