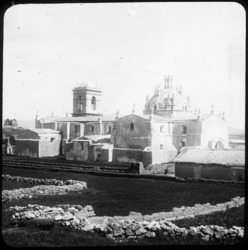 Juliaca is a major transit and trade point in the Puno region. The Iglesia Santa Catalina was built by the Jesuits. It is built of the local white volcanic tufa (sillar); its popular name is the “white church” (Iglesia blanca de Juliaca). Today it is under the Franciscan order. The style is called “indigenous Baroque,” built by local workers.