Understanding the Thermostability and Interdomain Communications of Human Pin1 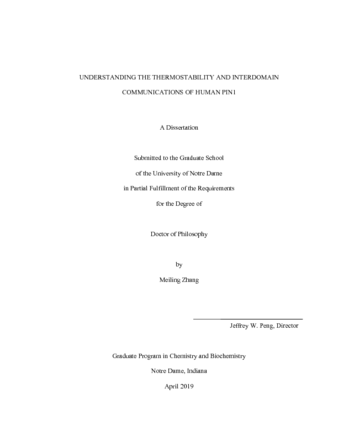 Can we predict the structure, dynamics, and function of a protein merely from its polypeptide sequence? Theoretically yes, but it has been proven challenging in practice. Although we can’t solve the big question as a whole yet, we can break it down into smaller puzzles. We endeavor to understand the atomic basis of the thermostability and long-range communication of a two-domain protein, human Pin1.

We found that a peripheral mutation (Q33E) unexpectedly destabilized the WW domain of Pin1, an all β-sheet domain, despite the existing experimental and computational evidence suggesting it is a benign mutation. NMR studies attributed the thermostability loss to reorganizations of electrostatic and hydrophobic interactions, resulting in propagated conformational perturbations. Microsecond MD simulations suggested the wild type fold relied on couplings between a surface electrostatic network and a highly conserved hydrophobic core; Q33E directly perturbed the former, thereby disrupting the latter.