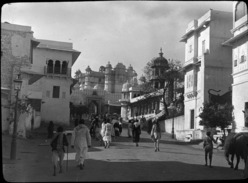 Udaipur was chosen by Maharana Udai Singh (reigned 1567-1572) of the Sisodia Rajputs as the new capital of the Mewar state, after the previous Mewar capital, the hilltop fortress of Chittorgarh, was sacked by the Mughal Emperor Akbar. The colossal City Palace was built on the east bank of Lake Pichola. The palace was begun by Udai Singh but dates mainly from the 17th and 18th centuries (building permitted by the Mughal overlords). It consists of a series of buildings faced in white plaster with steep, fortified windowless walls rising to meet tiers of balconies, towers and domed kiosks at the upper levels. The principal access is from the town bazaar through the Badi Pol, or Great Gate (1600). There are several palaces within the complex, numerous gardens and coutyards.