Orvieto Cathedral, Chapel of the Corporal: Overall view of chapel with frescoes, altar and aedicule-shaped tabernacle 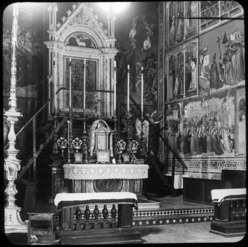 Bolsena is known for a miracle said to have occurred there in 1263, when a Bohemian priest, in doubt about the doctrine of Transubstantiation, reported bleeding from the host he had consecrated at Mass. The Cappella del Corporale in Orvieto Cathedral lies on the north side of the main crossing. It was built between 1350 and 1356 to house the stained corporal of the miracle of Bolsena. The chapel also contains the tomb of St. Pietro Parenzo. The chapel is decorated with frescoes depicting on the left wall the history of the Eucharist and on the right wall miracles concerning the bleeding host throughout church history. They were painted between 1357 and 1363. The aedicule-shaped tabernacle on the altar was designed in 1358 by Nicola da Siena and finished by Orcagna.