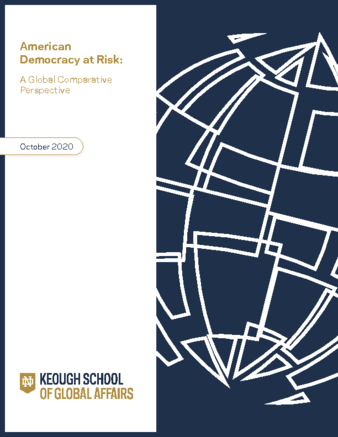 The 2020 election has the potential to be one of the most momentous in modern American history. Challenges to the integrity of the electoral process, threats of violence from extremist groups, and most alarmingly, President Donald Trump’s repeated refusal to guarantee a peaceful power transfer should he lose have created a climate of uncertainty about the election and its aftermath, with worrisome implications for the long-term health of American democracy.

While these circumstances are unprecedented in the US context, this democratic backsliding process has played out in other countries, from Viktor Orban’s Hungary, to Jair Bolsonaro’s Brazil, to Narendra Modi’s India. This report, complementing other academic and policy-oriented efforts, sheds light on American democracy and elections in a comparative perspective. It brings together distinguished electoral experts from the United States and other regions to identify warning signs of danger to the US electoral system, and assesses the risk of a major political crisis if a presidential candidate loses the election but rejects the outcome.