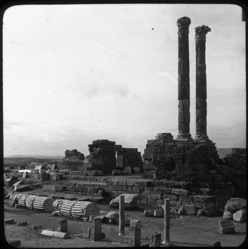 The capitolium (or Capitoline Temple), a magnificent temple to Jupiter, Juno and Minerva (begun ca 160 CE), was built on a high podium to the south-west of the town. It has approximately the same dimensions as the Pantheon in Rome.