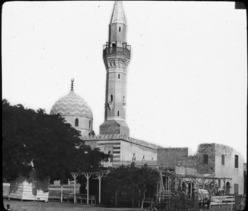 For centuries after the Islamic conquest in 642 CE Alexandria was the second city of Egypt and perhaps second only to Constantinople in the Mediterranean basin. The mosque was constructed in honour of Sufi Gaber ben Ishaq ben Ibrahim ben Mohammad al-Ansari (born in Fez, Morocco). The mosque directly faces the sea on Port Said St. Medieval Andalucian traveller Ibn Gobair is thought to be buried here.