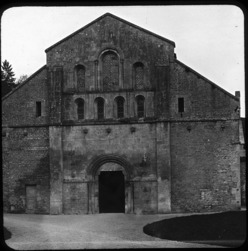 The abbey church, built of limestone, was begun ca. 1139; it was sufficiently complete to be consecrated in 1147. It is therefore the oldest, though not necessarily the most representative, of the surviving group of so-called Bernardine churches.