Athens Acropolis: Erechtheion: Historic view of the caryatid in the British Museum, taken by Lord Elgin 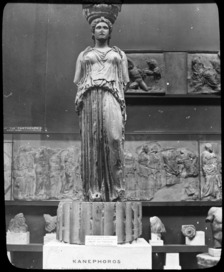 As displayed in the early 20th century. Parthenon Ionic frieze in mid background, Ionic frieze from temple of Apollo Epikourios at Bassai in top background.