Munot Fortress: Looking up the hill towards The Munot from the old town district 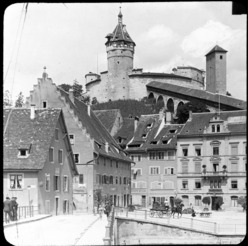 The Munot is a circular (ring-shaped) 16th century fortification for defense of the canton south of the Swiss city of Schaffhausen. It is surrounded by vineyards and serves as the city’s symbol. It was an artillery fortress overlooking the Rhine river with elevated cannon emplacements. It was already rather militarily outmoded by the time it was built. The city of Schaffhausen came into being at the location where trading ships had to set anchor because the Rhine Falls made it impossible to travel further.