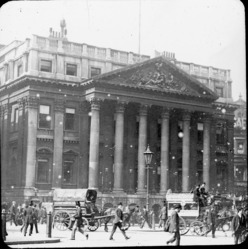 Mansion House is a rare surviving Georgian town palace in London. It is the official residence of the Lord Mayor of London. Dance’s designs of 1735 show the influence of Colen Campbell’s Wanstead House, Essex, particularly in the great hexastyle portico approached by a double flight of steps in two stages (now reduced to one). The internal arrangement around a courtyard (later filled in) included a ballroom lit by a clerestory and an ‘Egyptian Hall’, which took its name from a Vitruvian [Roman] prototype earlier drawn upon by Richard Boyle, 3rd Earl of Burlington, in his York Assembly Rooms of 1731-1732.