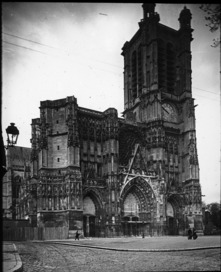 This image is flopped.

At the east end the seven-bay hemicycle is ringed by a single ambulatory with spacious radiating chapels. The transept has limited projection and no towers. At the west end the five-aisled nave is terminated by a three-bay façade. The interior is particularly harmonious, with proportions (height equals twice the span of the central vessel) that are modest and stable. Work began at the base of the choir hemicycle ca. 1200. The Parisian Martin Chambiges was invited to Troyes in 1502 to resolve the problem of demolishing the tower to make way for the new west façade. He designed a three-bay frontispiece that was deep enough to encircle the old tower and to replace the flying buttresses against the nave with new supports. The west front is the triumphant last flourish of Gothic in the Flamboyant style.