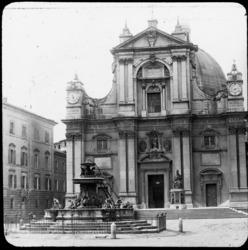 The sanctuary (Santuario della Santa Casa) consists of the basilica of S Maria, beneath the dome of which is situated the Santa Casa, the Holy House of the Virgin, encased within a structure designed by Bramante in 1509. The birthplace of the Virgin in Nazareth was popularly believed to have been rescued from infidels by angels, who transported finally to its present location in December 1295. The basilica is a Late Gothic structure continued by Giuliano da Maiano, Giuliano da Sangallo and Bramante. The façade of the church was erected under Sixtus V, who fortified Loreto and gave it the privileges of a town (1586). The main entrance doors (1590-1610) to the church were cast in bronze by Antonio Lombardi and his sons; the doors depict scenes from the Old and New Testaments. The interior of the basilica is lavishly decorated. The earliest work was carried out by Luca Signorelli and Melozzo da Forlì.