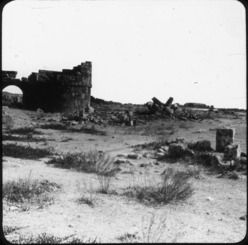 Hierapolis was first excavated by the German archaeologist Carl Humann (1839-1896) during the months June to July 1887. Excavations began in earnest in 1957.

Site in south-west Anatolia, Turkey. The town was built on a travertine terrace formed by sediments of hot mineral-rich springs; it was used as a thermal spa. The name Pamukkale means “cotton castle” after the white sediment. It was founded in the 2nd century BCE by the Pergamene kings at an important strategic position; it became part of the Roman province of Asia in 133 BCE, and during the Empire it was a prosperous trading centre. Christianity was introduced early; the apostle Philip died here (martyred by crucifixion, 80 CE). In the 4th and 5th centuries AD it was the seat of a bishop. It gradually fell into decay and was probably abandoned with the coming of the Saljuqs (12th century). It is now a UNESCO World Heritage Site.