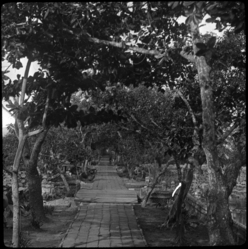 The Minh Mang Royal Tomb in Hue, Vietnam, is the final resting place of Emperor Minh Mang, who reigned from 1820 to 1840. Construction on his tomb began in the year of his reign, but it was still incomplete upon his death. The tomb was completed by is successor and son Thieu Tri during the years 1840 to 1843