Topographic views of Frankfurt am Main: Detail, upper part of fountain, near the Liebfrauenkirche and surrounding buildings 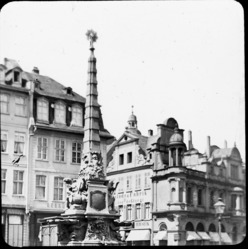 This Baroque style fountain (named Liebfrauenbrunnen), was erected on the Liebfrauenberg, formerly one of Frankfurt’s most posh locations, in 1769. The conical centre of the fountain consists of a rustic obelisk, copied (restored) by Kurt Zobel in 1970.

Views of Frankfurt am Main distributed by the French company G. Massiot & Cie (actual photographer unknown). Distributed before 1912. Large sections of the Altstadt were rebuilt after World War II bombing and so only a few old buildings are actually preserved today. The surrounding buildings (houses and shops) of the Römerberg (square around the city hall) are largely reconstructions today. These views show the area before WWII.