Fountain of the Innocents: Overall view 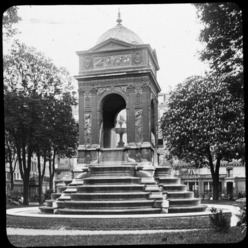 In 1549 Goujon collaborated with Jean Cousin in organizing the ceremonial entry of Henry II into Paris, an event that allowed the new generation of classicizing artists to display their skills. Goujon’s most famous work, the Fountain of the Innocents, the architecture of which was probably by Lescot, was originally built as a monument for the occasion. It was, until 1787, a rectangular structure on a corner, presenting two arched bays to the Rue aux Fers and one to the Rue Saint-Denis. The bays were articulated by fluted composite pilasters, between which were narrow vertical relief panels of nymphs holding urns. Horizontal relief panels of tritons and nymphs were placed above and below each bay, and the spandrels of the arches were filled by winged personifications of Fame. The present appearance of the monument, as a free-standing, four-sided structure, is the result of a late 18th-century rebuilding for which Augustin Pajou provided extra sculpture in an able pastiche of Goujon’s style. The vertical relief panels remain in situ, but the horizontal ones were removed around 1810 (now Paris, Louvre). All these reliefs, with their undulating contours, light, transparent draperies and finesse of execution, exude a pagan gaiety. Goujon transformed his sources in engravings after Rosso and antique sculpture to create a masterpiece of grace and harmony in which an echo of Hellenistic art can be caught.