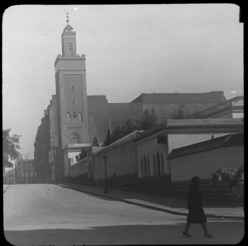 The largest mosque in France and the third largest in Europe. It was founded after World War I as a sign of France’s gratefulness to the colonies’s Muslim tirailleurs, 70,000 of whom died fighting against Germany. The Mosque was built following the mudéjar style. Initially sponsored by the king of Morocco, it was reassigned to Algeria in 1957 by the French Foreign Minister. The tile work was done by Moroccan artisans. The Paris Mosque was built between 1922 and 1926 in a composite Moorish style. The architects Robert Fournez, Maurice Mantout and Charles Heubès, based their design on plans drawn by Maurice Tranchant de Lunel, chief of the Beaux-Arts Service in Morocco, whose work drew on local influences.