Romantic Attachment and Conflict Behavior: An Evaluation of a Mediating Model for Infant Behavioral Outcomes 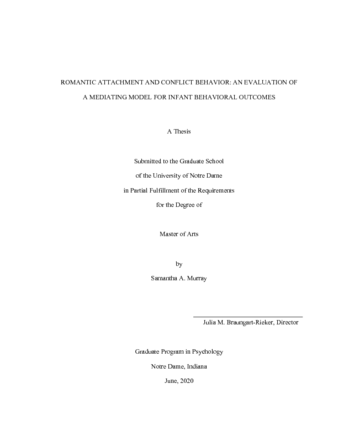 Since its conceptual emergence, attachment theory has played a significant role in shaping the parent-child relationship and child development literature. Hazan and Shaver are credited with launching the application of Bowlby’s theory to adult romance. While elsewhere in the literature parenting researchers deliberate the effects of the interparental relationship as understood in terms of constructive and destructive conflict behavior, adult romantic attachment theorists have begun to contribute to this conversation by considering the effects of parents’ romance on children’s development. The extant evidence addressing the gap between these factions of researchers highlights the potential moderating effect of romance between conflict behavior and infant development. The current study, alternatively, considers first the broader romantic context between parents and assesses conflict behavior as a mechanism of action for the modeling of partnership to children and consequential behavioral development. A mediation analysis is evaluated using mothers’ and fathers’ constructive and destructive conflict behaviors as a mediator between parents’ attachment styles and children’s problem behavior and behavioral competence. Results indicate that more secure attachment leads to better conflict behaviors, and more secure attachment leads to better behavioral outcomes; however, conflict behavior does not significantly predict behavioral outcomes for infants at 16 months.